Still alive and in the other social media channels. Here's are a couple of lists of movies I watched and music I bought in 2020. Did not buy much used vinyl as I'm getting choosier and did not get out to shops as much. I hope you are all well.

Posted by Someone Said at 6:04 AM No comments:

I did manage to see at least one film a week during this God-awful year. Most of them were thanks to the good people of TCM. The last film I saw in a theater was 1917. Also watched a lot of television shows, new and old. Giri/Haji was outstanding. What We Do in the Shadows is terrific. Probably more of the same in 2021. I do not see myself in a theater for many many months. Have a safe and peaceful New Year's Eve, we earned it.

Posted by Someone Said at 11:05 AM No comments:

Email ThisBlogThis!Share to TwitterShare to FacebookShare to Pinterest
Labels: film 2020

It's been three months

Still here. Still alive and COVID-Free. Still maintaining amid death, batshit crazy and being in place. My father in law died earlier this month of a non-COVID condition and that's taken a lot of good emotions away from us.

I was referred for cataract surgery in September, had the surgeries in November and that has changed my life significantly. Now I can see distance but need readers for up close. It's been a profound adjustment.

Still buying music, listening to it when I can. It's hard to focus and my guitar playing time has suffered.

Here's the list of what I bought this year. The stars mean I really liked it. My two faves are Bob Dylan's Rough and Rowdy Ways and Emma Swift's Blonde on the Tracks. It's been a Bob year.

Have not bought much vinyl due to COVID, but my recent nothing else to do but buy shit during COVID phase brought me some wonderful Japanese pressings, and the Dave Clark Five record is a revelation of rock and roll energy.

Wishing you all a peaceful Christmas, and I'll probably post a movies I watched entry next week. Be safe.

Posted by Someone Said at 11:04 AM No comments:

Posted by Someone Said at 6:16 AM No comments:

In deep as the walls thicken

This pandemic has been a tough thing to keep any focus throughout. From working at home and missing the Hell out of physical materials to a bored as Hell special needs teenager whose life has been upended overnight - decisions are hard.
I'm supposed to be going back to work on a half day basis later this month, and I'm ok with that. Again, I really miss books, maps and I do not think either of them are going to kill me. Hell is other people though and there will be maybe a third of normal staffing in the building so there will be social distances. My son's school is set to be distance learning later this month and full time in early September. He does not take well to distance learning and needs a lot of one on one education. I'm really torn. If there was a wsy for him to go a couple of days a week I'd be more accepting.
I also do not think Ohio's numbers are going to be low enough for anyone to go back to school. Naturally I'm concerned for my son's health. I am also concerned for the health of his teachers, the school's staff, other students and so on. This is really hard. It's been hard to plan and it's going to be very difficult to implement. No one is going to come out ahead.
All the while legal documents are now in place to assist with the inevitable turning of 18 by the soon to be legal adult. It's a weird time.
What would have been my 35th wedding anniversary was last week. Twelve years ago she said to never contact her again, I have not done so. Meanwhile she blocks me on Facebook even as she liked one of my tweets a few weeks ago.
Another result of the lack of courage this country has is that the U.S. Passport has become a useless document, we're the shithole country now. It did not have to happen this way and I blame the GOP cultists in the senate.
So we sit at home, watching the sparrows and house finches out the window. While I Aimlessly play the new acoustic I traded up for, and wait for what?
Posted by Someone Said at 12:36 PM 2 comments:

Email ThisBlogThis!Share to TwitterShare to FacebookShare to Pinterest
Labels: pandemic

Posted by Someone Said at 6:26 AM No comments:

The last few nights in Columbus have been a tense display of protests, property damage and police overreach. I'm grateful that it has not been worse, because it could be.

Yesterday I watched the social media feeds of friends of mine bravely go to a protest downtown. For over an hour, maybe longer, it was peaceful. Then, somewhere, a switch was activated and the police, mounted police and SWAT teams indiscriminately pepper sprayed scores of people.

Police Chief Thomas Quinlan blamed the protesters, the protesters blamed the police and the Mayor of Columbus, Andrew Ginther...well where was he while the president of Columbus City Council Shannon Hardin, County Commissioner Kevin Boyce and Congresswoman Joyce Beatty were on the front line and were also pepper sprayed by the police.

It was tense and this old man on the couch was worried about his friends, some of whom were sprayed or shot with wooden bullets but are otherwise intact.

The protests spread to the short north, where many businesses had already boarded up their windows in anticipation of confrontations. Several shops has already sustained damage and looting during the previous nights clashes.

By this time Mayor Ginther came out of meeting with developers, or where ever he was receiving orders, to issue this tweet.

"Racism and discrimination are threats to the quality of life and safety of our community. We are committed to addressing these concerns and making changes when necessary. We believe that we can peacefully protest, keep each other safe and make sure that our community remains America’s Opportunity City"

I'm so glad he took the time to issue a marketing and branding report for Columbus. Ginther had a press conference with Governor DeWine, and the national guard was called in to assist. Ohio and the national guard have a wonderful history together. A 10PM curfew was enacted and it seemed like it was respected as the streets were clear. 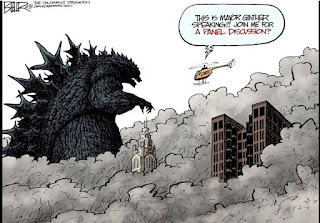 I woke up to what I think is calm in my newsfeeds. I know there were more injuries and violence in other cities. We're not doing this well. How do we fix this and all that? Committees, blue ribbon panels, citizen councils taking a knee and the like - they have not worked. The only thing that has not changed is the police, who are now equipped like Robo Cop while school buildings have leaky ceilings.

In this culture, this climate, with this administration in charge in the White House, what do we have the collective will to do to stop this racist county from being racist anymore?
Posted by Someone Said at 8:33 AM No comments:

Someone Said
I am the man who tells you something. Then you say, "someone said" this. I am forgettable, unless I do something wrong. Then you complain about me to management. You should all come to Writers Block Poetry on Wednesday nights at Kafe Kerouac. I have a Scottish wife. I have son who is filled with sweetness. Another year of changes is ahead, good changes.